The last year has certainly been a strange one, but last week was the first time I had the sense a little bit of normal was returning. Having been working from home, I again started visiting our workspaces as restrictions relaxed. It was great to cowork with others, but it was mainly just Jules (a friend, Othership member, and somewhat nomadic freelance SEO analyst) and I. Occasionally the coworking space host was my only coworker and the person would have me sit close by and chat endlessly for the entire day – one of the side-effects of having lived a rather too solitary life the last year. However this isn’t a story of doom and gloom, but one of optimism. Last week I started to see a very noticeable change.

As always, normal started with a coffee

On Tuesday (25/04/2021 for those reading later on), I cycled into town for the weekly test of a new Othership workspace. This time we would try Working From by Hoxton Hotel, The Hoxton’s new flexible office and coworking offering. I arrived early and bumped into Giedre in reception where we were treated with a huge smile and an access card for the day. After not quite figuring out the lift and realising there was workspace on every floor, we headed up to the 12th floor. 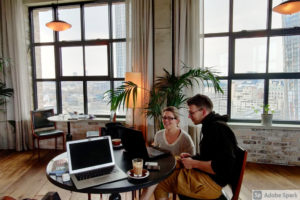 As the doors opened, we were treated by the spectacular views across London, the smell of warm barista coffee and the chirp of vibrant activity. All as you would expect in a coworking space, at least would have pre-COVID. We grabbed a flat white and a latte, set the laptops out on the table, and sat back with huge smiles. All this being done in wonder and amazement at a world until that day, we thought was still non-existent.

Lunch, and even a beer in the sun 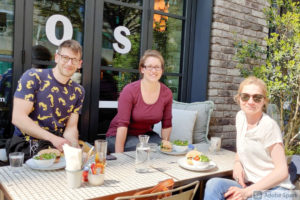 As midday approached, Jules and I needed to have a meeting. We explored the other floors, with regular remarks at the mistake of not bringing the SLR. We made a bit of a bodge at the second cup of coffee from the free tea and coffee area and then decided to sit in the sun outside the front of the hotel. After a long but fruitful meeting, Giedre came and joined us for lunch before we headed back to the workspace and finished out the workday. As the day came to a close we fancied keeping the special normality going and headed over the road for some team beers and pizza.

Never has normality felt so special!